RAIL MUST BE PROTECTED 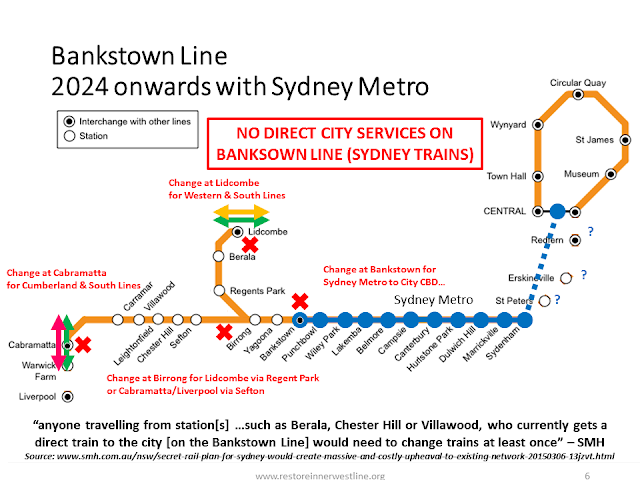 Oppose the suspension of trains for western (to Cabramatta/Liverpool) & northern (to Lidcombe) Bankstown Line stations during the Metro construction (Sydenham to Bankstown).

Transport for NSW and the State Government have announced that the shutdown of the Bankstown Line during construction of the Sydney Metro between Sydenham and Bankstown and the operation of replacement bus services.

Sydney Metro has failed so far to rule out that only commuters on the Sydenham to Bankstown section of the line will be forced to use replacement bus services.

Commuters in the west (to Cabramatta/Liverpool) and in the north (to Lidcombe) of Bankstown station currently also face the prospect of years of replacement bus services despite the Sydney Metro terminating at Bankstown.

Restore Inner West Line has called on Transport for NSW and the State Government to guarantee that train services to the west and north of Bankstown will be maintained (and increased) during the construction of Sydney Metro (Sydenham to Bankstown).

Restoring the Inner West Line (Liverpool/Bankstown via Regents Park) will also assist in minimising the disruption to commuters the construction of the Sydney Metro.